Credit: 360nobs
Peter one half of the feuding pop group P-Square
“And cutting me off from a picture and replacing me with a studio set says it all my bro. All because you want to sound matured And letting the pple insult and Laff at me. Peter Okoye the social media rant. I wish you well in all you do my bro. God bless our hustle .”  #voice4thevoiceless” – Peter.

One half of the singing P-Square twins, Peter Okoye has given a slight hint that the music act, P-Square could be heading for a divorce .
Reacting to his twin brother Paul’s Instagram post recently where he sided with their brother and manager, Jude Okoye. Peter has now wished Paul success in his future endeavors.

A photo of Paul and Jude  had been shared with Peter cut off in the picture. It was the same picture that Paul shared on Instagram when he declared his support for Jude.

… The saga
This has been a war fought on the pages of social media, with the occasional fisticuffs thrown in for added spice.

It will be recalled that Jude was conspic­u­ously snubbed Peter’s wedding, on the grounds that had their mum been alive, she would not have approved of the marriage be­tween Peter and Lola Omotayo when they got married last year. Peter was in turn absent at the reverse fixture for elder brother, Jude’s wed­ding.//pagead2.googlesyndication.com/pagead/js/adsbygoogle.js

Credit: naij
Paul Okoye: The other half of the singing duo. ‘I’d rather chose family’.

According to insiders, after Jude allegedly snubbed his new bride and rejected his marriage, Peter has since been plotting a payback. he angrily took to his Instagram and lambasted fans challeged his absence at Jude’s marriage, after the event.

“Just to remind some mufus, PSQUARE is PETER & PAUL and I am sure you know what that means. Talk sh*t again and you would be blocked. Mufus talking about fam­ily! My number one fam­ily for now is the one I have built and nobody can change that. People talking shit about blood is thicker than water, please which blood is thicker than the one of my chil­dren?
This situation apparently has been a while coming as the brother are involved in a yet another messy public spat for the umpteenth time in the past two years, since Peter reportedly  refused to have anything to do with P-Square because he reportedly, felt his input was being undermined and his contributions went unappreciated

Earlier in the week, Peter again took to Instagram, to express his dissatisfaction with their current management. He also spoke of his long standing desire to end their relationship with their manager Jude,  who just so happens to be older brother Jude Okoye. In the process, he revealed some internecine sibling rivalry between the singing act and their manager. The recent outburst, apparently, can be linked to long standing dissatisfaction with the current management style which had been simmering, according to Peter,  for nearly five years.

Peter, who was rumored to have gotten into a fight with his twin Paul, shortly after they each got married, indicated there were cracks within the Square organization with hints that he purposely went solo on his most recent projects, including the reality television show ‘Dance With Peter’, to distance his business interests from what, he described as the inertia of their current management. It is being reported that his singing partner, twin brother Paul, is not connected with the project, neither is their current management.
All indications is that the this latest act by Peter was intended as a warning to his brothers that he wanted out of the working relationship which he believes is holding back the group as it appears to have run it’s course. He has gone public with his grievances, since earlier attempts at resolving the matter have been dismissed by his partner and management. 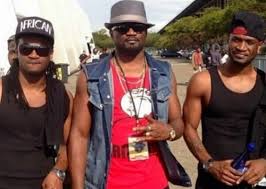 Peter had gone on Instagram tweeting a demand the dissolution of their relationship with their current management team. According to him it is based on a non-progressive, ‘family-centrist’ management style which had affected the productivity of the Square brand.  One of his issues as mentioned in his tweets is a lack  lack of a proper business structure hence, he would rather P-Square parted ways with the current management. Peter insists that his charges are directed at Jude, not his twin, threatening to do a tell, all if the unusual business practices that accommodated Jude as P-Square manager is not terminated. His partner and twin brother sees it differently. Paul has elected to stand with ‘Family’, read, Jude. He responded via Instagram, as well

Peter later clarified that he was not after the breakup of the group, he was just demanding they fire their management team
... Are you confused yet? Continue reading.

… Reminisce
Here is a sample of the various disturbing reports about the group floating in the country’s entertainment media, all indicating that the pop group that has recently thrilled the world with their hits like ‘Personally’ and ‘Shekini’ may not be around for long as a duo.

“For discerning observers, they would know that the trouble in the P-Square family didn’t start today. Tongues had started wagging some years ago when Peter began to make moves which indicated that he wanted to stand on his own. First, he got a solo brand ambassador deal with Olympic Milk. This was followed by his own reality show, ‘Glo Dance With Peter.’ However, the story didn’t start there.”

“Paul Okoye, the other half of P-Square has  chosen to stand with brother and manager, Jude. He uploaded a picture of himself with Jude on his Instgram page, deleting Peter from it, and replacing him with a studio. He added the caption, ‘This is where I belong and this is where I stand…you do music in the studio, not on social media, you have family issues, you discuss that in close doors, not on social media…Family is family, blood is blood…If you don’t do family business, then who am I to you?. ”

…so much drama in the P-Square fold…  spouses, kids involved. Is a break-up imminent ?
Even more recent sevelopments lend credence to the feeling, in some quarters that the group ultimately could break-up due to the endless stream of laundry aired on social media

A little while ago, Peter was on social media again, apologizing for his latest tweets. It is believed the apology was to assuage their fans. It was not an attempt to mend fences with his brothers, neither was it because he has really forgiven Jude.

– Someone please take the keyboard away from these ‘adults’. This, sad to say, is an unfortunate situation where family and emotion has been injected into a business relationship. Get off social media. It is a matter best left for attorney’s to sort out. The members of the band can even co-exist under a modified management structure that allows each to be on their own. Ultimately, you might part ways as partners, but will forever remain siblings