‘I am deeply ashamed’ – Reality star Felicity Huffman will go to jail for her role in the infamous college admission scandal, albeit for a day

Huffman, 56, was also ordered to pay a $30,000 fine and serve a year of supervised release, as well as 250 hours of community service. She showed no emotion as the judge read her sentence

She made similar arrangements for her younger daughter, Georgia, but didn’t follow through, prosecutors said

Felicity Huffman will be an inmate. For a a couple weeks

A Boston judge sentenced Felicity Huffman to two weeks behind bars on Friday for paying $15,000 to inflate her daughter’s SAT scores in the sweeping college admissions scandal.
The former “Desperate Housewives” star wept as she apologized to the court and her two daughters for her shameful actions before Judge Indira Talwani handed down the sentence.
“I am sorry to my daughter Sophie, my daughter Georgia, my husband William. I have betrayed them,” Huffman began.


She recalled the time when she was driving to the testing center after agreeing to scam the system.
“Sophia was in the car next to me, she was nervous, asking if we could get ice cream. I thought … I can just turn around … and to my eternal shame, I didn’t.”
She sobbed as she added, “I can only say I am so sorry, Sophia. I was frightened, I was stupid, and I was so wrong. I am deeply ashamed at what I have done. I have inflicted more damage than I could imagine.”
Huffman was also ordered to pay a $30,000 fine and serve a year of supervised release, as well as 250 hours of community service. She showed no emotion as the judge read her sentence.

Felicity Huffman [left] was accompanied to court by her husband, fellow Hollywood star William H. Macy, [right] who was not charged in the scandal, at John Joseph Moakley US Courthouse in Boston on Friday

She will self-surrender to a federal lockup Oct. 25.
Her lawyers requested that she serve time at FCI Dublin, a low-security, all-female inmate prison in northern California.
The 56-year-old mom of two pleaded guilty to charges that she paid college fixer William “Rick” Singer $15,000 disguised as a “purported charitable contribution” to boost elder daughter Sophia’s test scores.
Prosecutors said she made similar arrangements for her younger daughter, Georgia, but didn’t follow through.


Earlier Friday, Huffman arrived at the federal courthouse holding hands with her husband, fellow Hollywood star William H. Macy, who was not charged in the scandal. Huffman’s brother Moore Huffman Jr. was also in attendance.
They left the courthouse without saying a word to the crush of reporters outside.

Felicity Huffman in a deal with prosecutors,  pled guilty to conspiracy to commit mail fraud and honest services mail fraud for paying $15,000 for her daughter’s SAT answers to be corrected as part of a college-admission cheating ring masterminded by Rick Singer.

Prosecutors asked for Huffman to be sentenced to a month behind bars, while the Emmy winner sought for probation and 250 hours’ community service. Both parties agreed she’d pay a $20,000 fine as part of her plea deal.
Ahead of sentencing, US Attorney Eric Rosen slammed the actress, calling her actions deliberate and saying her request for a fine and probation was hardly punishment.
“With all due respect to the defendant, welcome to parenthood,” Rosen sniped, referring to Huffman’s letter to the judge last week in which she called “motherhood bewildering.”
The prosecutor also repeatedly pointed to Huffman’s celebrity status, saying being “a wealthy privileged mother” doesn’t mean she gets to go scot-free.
“And the $20,000 fine? For someone with the net worth in the tens of millions?” he added.
Martin Murphy, Huffman’s lawyer, meanwhile, tried to convince Talwani that probation was “real punishment” and that her crime could’ve been far worse.
“Ms. Huffman did not enlist her daughter in this crime. And when she had the opportunity to decide whether she was going to do this again, she said no,” Murphy said. “Her moral compass — she was able to revisit it.”
Before sentencing Huffman, Talwani acknowledged that Huffman took responsibility early on but also said “trying to be a good mother doesn’t excuse this.”
Huffman was among dozens ensnared in the bribery scandal that exploded earlier this year, implicating parents, coaches and test proctors as part of a wide-ranging scheme that weaseled under-qualified applicants into top colleges across the nation.
“Full House” actress Lori Loughlin and her husband, fashion designer Mossimo Giannulli, also were charged. They have pleaded not guilty.
Meanwhile Twitter rips into Felicity Huffman’s 14-day prison sentence.

The Internet wasted no time condemning Felicity Huffman‘s 14-day jail sentence as far too small a penalty for her role in the massive college admissions scandal.
As news broke Friday that the Hollywood star will serve just two weeks for paying a college admissions fixer $15,000 to boost the SAT scores of her daughter Sophia Grace Macy, cries of “joke,” “scam” and “wealthy privilege” rang out across Twitter.
“14 days. What a load of crap,” tweeted @merstew.

14 days. What a load of crap. #felicityhuffman

I’m just glad no one will ever buy their way into college again. #FelicityHuffman

I’m just glad no one will ever buy their way into college again. #FelicityHuffman

I’m worried about her, quite frankly. A long stretch like that can really change a person.

In a cynical post Lionel Mandrake joked that Huffman’s career will only benefit from the short stint in the clink and the accompanying publicity.

Felicity will put her 14 days to good use and hire a ghostwriter to get a tell-all book ready for her to promote when her sentence is finally completed. #FelicityHuffman

Some even suggested, the reality star will make millions on the book rights, after her jail stint one wag predicted.

BREAKING: Felicity Huffman has been sentenced to 14 days in prison, a $30,000 fine, a year of supervised release, and 250 hours of community service for her role in the college admissions scam 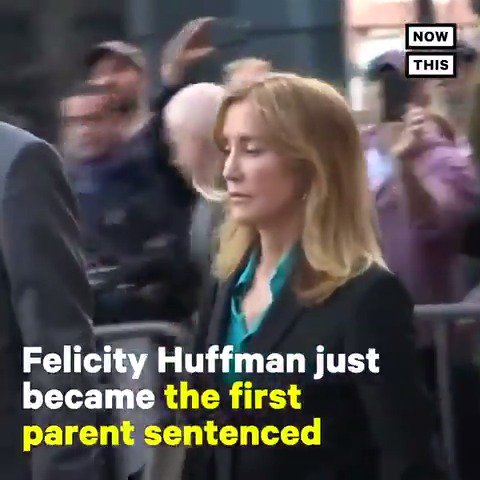 This is just wrong! 14 days! Talk about privilege! Jesus! She will likely sell the film rights from the book she rights and get paid millions! #FelicityHuffman

Woman arrested in El Paso is charged with aggravated kidnapping after she offered Honduran migrant mother a ride to a local bus station, then kidnapped her 18-month-old son demanding $10,000 ransom – Jenna Leigh Roark held the child for five months

Jenna Leigh Roark, allegedly kidnapped the 18-month son of an illegal immigrant mother, and then tried to ransom the boy back to her The 45-year-old Texan was arrested after [...]