Lonnie Franklin gets death sentence for the murder of a teenage girl and nine women in a notorious Los Angeles killing spree that spanned two decades, by some accounts the number of victims could even be triple the stated figure.In May, 2016, a jury convicted Franklin of 10 counts of murder. His victims, in order of death, were: Debra Jackson, 29; Henrietta Wright, 35; Barbara Ware, 23; Bernita Sparks, 25; Mary Lowe, 26; Lachrica Jefferson, 22; Alicia Alexander, 18; Princess Berthomieux,15; Valerie McCorvey, 35; and Janecia Peters, 25.

Lonnie Franklin, dubbed the ‘Grim Sleeper’ for an apparent break between killings, for almost a decade

“This is not a sentence of vengeance,” Superior Court Judge Kathleen Kennedy told Franklin as relatives of his victims looked on, some of them in tears. “It’s justice.”
Franklin, 63, was convicted earlier this year of killing nine women and a teenage girl from 1985 to 2007. During the penalty phase of his trial, prosecutors connected him to several additional slayings. Detectives believe he may have killed at least 25 women.
The judge read the names of the 10 victims Franklin was found guilty of killing. In each case, Kennedy told him, “You shall suffer the death penalty.”
As she spoke, some of the victims’ relatives cried, others sighed. One man repeated: “Amen, amen, amen.”
The California serial killer known as the Grim Sleeper has been sentenced to death for a homicidal spree which targeted poor black women over two decades.
Lonnie Franklin, 63, a former garbage collector, appeared impassive as he was sentenced on Wednesday for murdering a teenage girl and nine women in southern Los Angeles between 1985 and 2007.
“What you’ve done is not justifiable under the laws of God or laws of man,” superior court judge Kathleen Kennedy told him as victims’ relatives looked on, some in tears. Others sighed and said “amen”.
The judge read the names of the 10 victims, pausing each time to say: “You shall suffer the death penalty.” 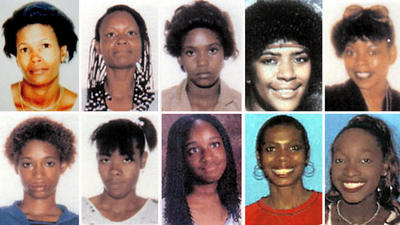 Franklin preyed on young vulnerable women, the least likely to be missed.

The ‘Grim Sleeper’ nickname was coined for an apparent 13-year hiatus in slayings but authorities now think Franklin never rested. During the penalty phase of his trial prosecutors linked him to five additional murders. Detectives believe he may have killed at least 25 women.
Some were drug addicts and prostitutes and nearly all were from poor, marginalized neighborhoods. Community members complained it took police two decades to link the cases to a single killer. Most were shot at close range, though two were strangled and two were both strangled and shot.
The 2007 murder prompted a taskforce to re-investigate previous cases. DNA from Franklin’s son showed similarities to genetic evidence found on some victims. A detective posing as a busboy at a pizza parlor retrieved utensils and crusts touched by Franklin during a birthday party. Lab results connected him to some of the victims.
Recounting her experience, Laura Moore , a survivor of Franklin’s attacks told the court how a man approached her at a bus stop in the spring of 1984 and offered a warning: You shouldn’t be out here alone.
“Bad guys will pick you up,” he told her. “Let me take you where you have to go.”
Moore, then 21, agreed, reluctantly. As the man drove off, he told her to put on her seat belt. When she refused, she said, he reached under his seat, grabbed a gun and shot her six times. Wounded, she managed to escape, but turned back to study his face. That man, Moore said, was Lonnie David Franklin Jr., now better-known as the “Grim Sleeper” serial killer.

Justice at last: Victims’ relations comfort each other after the verdict

Franklin, who also worked as a garage attendant for Los Angeles police department, was convicted in May after a lengthy trial. He denied any involvement in the murders but did not speak in his own defense. His attorneys suggested a “mystery man” was the real killer and asked jurors to spare Franklin’s life. The unconviced jury voted for the death penalty.
Before sentencing,  Judge Kennedy said she did not buy the defense argument that California’s death penalty was unconstitutional, saying overwhelming evidence supported capital punishment in this case. She also rejected a defense request for a new trial on grounds of alleged prosecutorial misconduct.
For the trial, prosecutors produced DNA, ballistics, photos and testimony of a victim who survived a Franklin attack, Enietra Washington, who escaped after being shot. A Polaroid photo of her partly nude and bleeding was found in Franklin’s garage. “That’s the person who shot me,” Washington told the court, pointing at the defendant.
Deputy district attorney Beth Silverman said Franklin’s motive was evil and irredeemable. “He is a psychopathic, sadistic serial killer who takes joy in inflicting pain on women and killing them.”

The capital sentence followed an emotional hearing during which victims’ relatives confronted Franklin.
“The defendant took my daughter, murdered her, put her in a plastic bag – a trash bag – like she was trash,” Laverne Peters, whose 25-year-old daughter was found in a dumpster in 2007, told the court. “My hope is that he spends the rest of his glory days in his jail cell, which will become his trash bag,” her mother said.
Mary Alexander, whose 18-year-old daughter was murdered, asked Franklin to turn around and face her. He did, and held her gaze.
“I’d like to know, why?” Alexander asked.
Franklin whispered something inaudible.
Alexander, louder: “Why?”
Franklin again muttered something inaudible.
“I know she didn’t do anything to hurt you,” said Alexander. “I know that.”
Franklin nodded.
Alexander said she was struggling to forgive him. “I’m still battling that.”
Franklin nodded and turned back to the judge.
In imposing the sentence, Kennedy said she had struggled throughout the case to understand what motivated Franklin. In the end “It doesn’t matter why,” she said. “There could never be a justification for what you have done.”
He becomes the 747th person on death row in California.

Serial kidnapper, Benjamin Obadiah Foster, 36, who tortured and tried to kill woman he met on dating app, dies from self-inflicted gunshot wound after stand-off with cops at victim’s Oregon home