A Houston mom who had a fully grown male tiger and three cubs roaming in her home was charged with child endangerment, police said.
Trisha Meyer, 34, allowed the four tigers, a fox, a cougar, a skunk and several monkeys to walk freely in her house around her home schooled her daughter Serena, 14, according to charging documents filed in Harris County court.  KPRC-TV  reports that Meyer was arrested Nov. 7 in Nevada.
Police said Meyer first caught their attention in August, when a California man alleged she sold him a Savannah Kitten but never delivered his animal.
Trisha Meyer promised to sell an exotic Savannah kitten to the complainant for $3,000. More than five days after the man wired the first $1,500 to a bank account belonging to Meyer’s daughter Serena, the would-be kitten owner was disappointed to discover that cat had still not arrived. Even after receiving the full $3000, Meyer never sent him the cat known for leopard-print fur. She falsely said the cats are illegal in California and refused to give him a refund, investigators said. 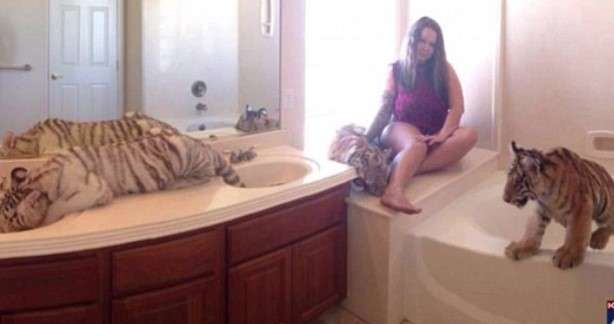 Trisha Meyer kept  three tigers, a cougar, a skunk, a fox and monkeys inside her house

Investigators following up on the fraud charges  visited Meyer’s rental home the following month and met her daughter was petting the tiger cubs when the officers showed up Sept. 25, according to court documents.
Meyer, who admitted that the cubs “were dangerous and could kill,” told the investigators she let the entire menagerie loose in her home, the charging document showed. One of her monkeys had attacked someone recently, and as she also admitted to investigators, they “can be vicious”Meyer also told authorities “she only locks the tigers up when she is away from her home,” while the criminal complaint “noted that the defendant [who] home schools her children,” did not voluntarily deliver her child to social welfare workers as instructed.
Police contacted her landlord who then kicked her out of the home. Subsequently, she left for Las Vegas with all of her exotic pets according to the Houston Chronicle.

“She only stayed there for three weeks before I found out,” Meyer’s landlord, Binh Truong, told the local newspaper. “I don’t know how someone can put that much damage in three weeks.”
Police arrested Meyer west of Las Vegas in Pahrump, Nev. last week, according to the court documents. She faces extradition back to Harris County, where she is will be facing incarceration with a $10,000 bail on a felony charge of endangering a child.

‘Child’s father’, 24, is arrested two days after young mother was killed with single shot to the back of her head while pushing three month-old baby in stroller through NY city’s Upper East Side

‘Ex-boyfriend’ is arrested two days after young New York mother was shot dead at point-blank range while pushing her infant in a stroller through [...]