O'Riordan's death was  'sudden' and that her family are 'devastated' said her publicist. Cause of death was not specified

It also featured prominently in the 2006 Adam Sandler movie “Click,” prompting a brief cameo by O’Riordan to sing the song in a wedding scene. The Limerick, Ireland native got her start in 1990 after a successful an audition to join brothers Noel and Mike Hogan in their band the Cranberry Saw Us. Not long after, the band, with O’Riordan as an important piece, achieved international recognition on the back of their hit album “Everybody Else Is Doing It, So Why Can’t We?”

Several hits and five albums later, the pressures that come with being dubbed “Ireland’s biggest musical export since U2” by Rolling Stone, took it's toll. The Cranberries went on a break in 2003. The band regrouped in 2009, and were slated for a European ans American tour this past summer. That tour however, was cancelled as O'Riordan recovered from an "ongoing back problem," according to The Cranberries' website. "Unfortunately Dolores O'Riordan's recovery from her ongoing back problem which forced the cancellation of most of the band's European tour this Summer has not been going as well as expected to such extent that her Doctors have now instructed her to cancel her upcoming almost sold out tour of North America with the band," the statement read. The band’s final album with O’Riordan. an acoustic compilation record called “Something Else,” was released in April. The 46-year-old singer divorced from her husband of 20 years, Don Burton, in 2014. Burton, the former Duran Duran tour manager and O'Riordan shared three children, Taylor Baxter, Molly Leigh and Dakota Rain. 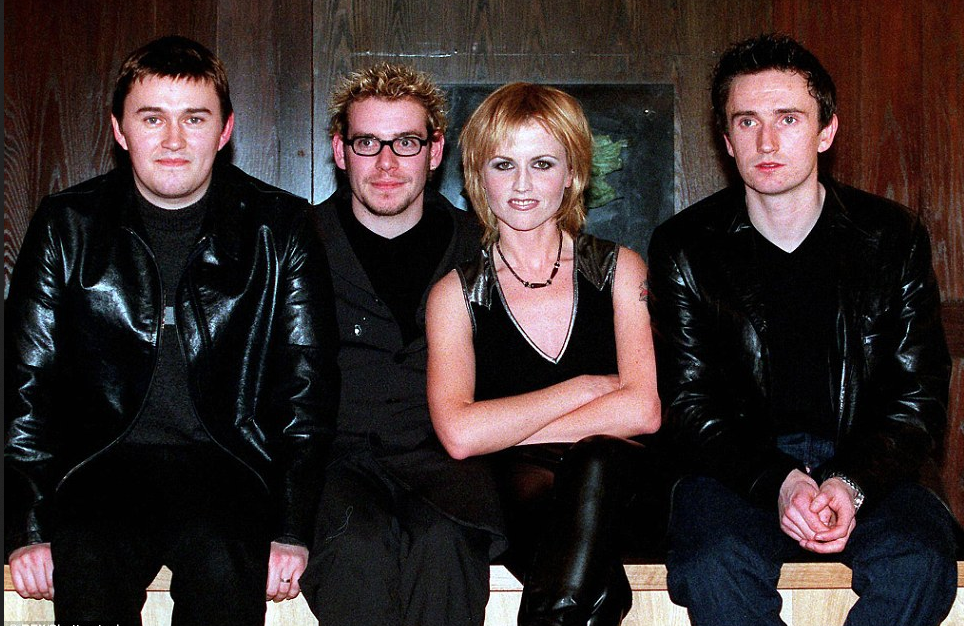 Dolores O'Riordan [center],  with her cranberries bandmates in 1999 photo

The singer seen here on “Saturday Night Live,” was the lead singer of the popular Irish rock band The Cranberries

The singer said in May that she was more than happy to swap her time in the spotlight for time at home.
“The best time in my life was the years spent at home with my family. I love being a mum. My kids don’t see me as a famous person, or have any kind of expectation; I’m just their mom,” she told the Irish News. It’s no surprise O’Riordan expressed a sense of calm at living her life off stage. In a recent interview, she said the sudden burst of fame The Cranberries experienced in the mid-‘90s, particularly after the 1996 release of their third album “To the Faithful Departed,” was almost too much to handle. “For as long as I could, I held on to those years like I was gripping a rollercoaster ride,” she told the Irish Times in May. “I got sick, had a meltdown — it was too much work that caused it.” O’Riordan also revealed in May that she was diagnosed with bipolar disorder in 2003. The Cranberries wouldn’t go on hiatus for another seven years after her self-proclaimed “meltdown,” but putting the brakes on their success seemed to serve O’Riordan well; she released two solo albums during the break: “Are You Listening?” in 2007 and “No Baggage” in 2009. By that same year, the band was back with a reunion tour and the album “Roses.” “It felt natural being back with the band. The Cranberries just fit together. I think we missed each other and that can be a good thing. Sometimes it takes a break apart to make you even stronger,” she said of reviving the group. Their latest touring venture was cut short after several shows due to O’Riordan's health woes, but the singer had previously voiced her excitement at hitting the stage and getting back into the studio. “Hopefully, after this tour we’ll write new material, but at the same token I genuinely don’t expect to be as successful as we once were,” she told the Irish Times. “The 1990s was our time for that, I think – we were hungry and on fire. Now, we’re older, we have kids, and I know we’ll never get those earlier moments back again. Not that I want them.” The singer also lent her vocals to the alternative band D.A.R.K., formed by DJ Ole Koretsky and Andy Rourke, former bassist for The Smiths. The band, formerly called Jetlag, released their debut album "Science Agrees" in 2016. 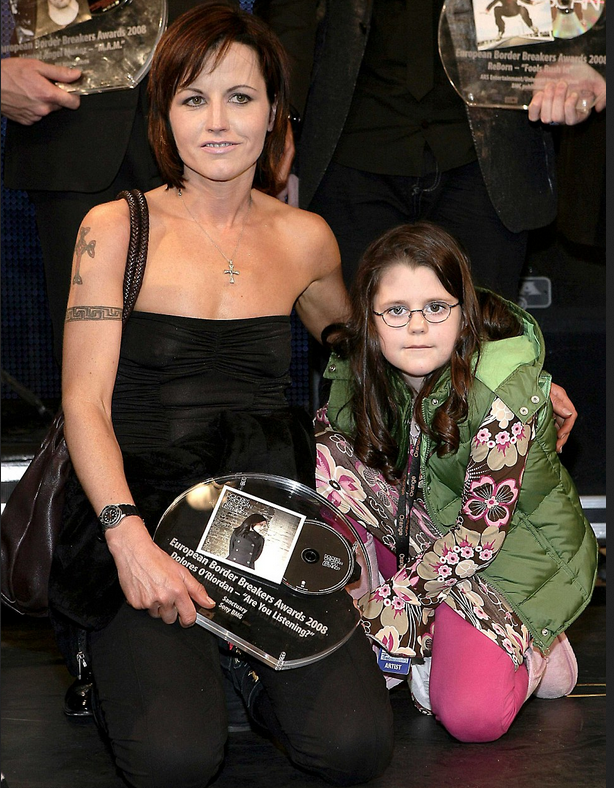 Dolores O'Riordan with daughter Molly in 2008. She also shares on Taylor and  daughter, Dakota with her ex-husband Burton, as well as step-son Donnie

O’Riordan, seen here on stage,  rose to fame in the 1990s with the indie band, after the biggest hit, Zombie. Lately she has been singing with the band D.A.R.K.

As news of her sudden death stirred a torrent of tributes in for O'Riordan. "Take Me to Church" singer Hozier, who also hails from Ireland, praised O'Riordan's memorable voice in a touching Twitter post. "My first time hearing Dolores O'Riordan's voice was unforgettable. It threw into question what a voice could sound like in that context of Rock. I'd never heard somebody use their instrument in that way. Shocked and saddened to hear of her passing, thoughts are with her family," he wrote. Irish President Michael D. Higgins issued a statement, praising The Cranberries' "immense influence on rock and pop music." "It is with great sadness that I have learned of the death of Dolores O'Riordan, musician, singer and song writer," he wrote. "I recall with fondness the late Limerick TD Jim Kemmy's introduction of her and The Cranberries to me, and the pride he and so many others took in their successes. To all those who follow and support Irish music, Irish musicians and the performing arts her death will be a big loss." 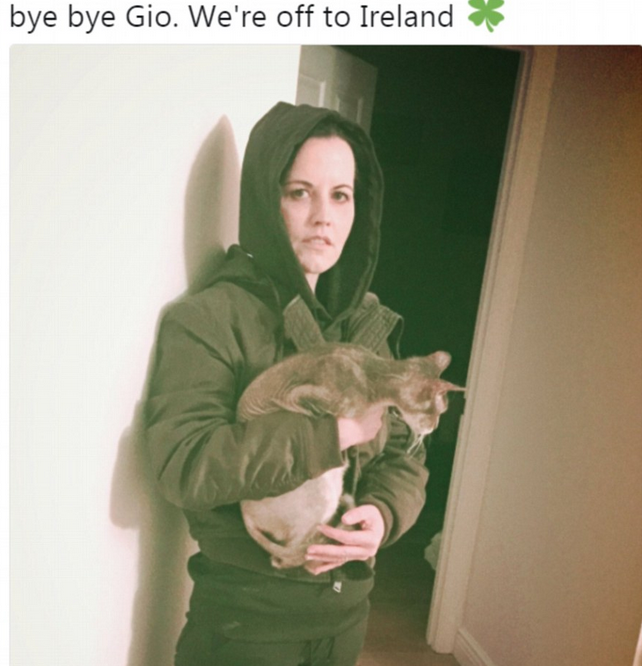 Irish pride: O'Riordan from Limerick, Ireland, last posted a picture of herself with her cat on Twitter on January 4 with the caption: 'Bye bye Gio. We're off to Ireland.'

Other tributes have come from the like of singer Liz Phair who expressed her condolences with "Devastated for fans and her family — Dolores O'Riordan had such an exquisite voice, so distinctive and defining of an era. She would have continued to be a rare musical treasure late into a long life," Phair wrote. Comedian James Corden meanwhile, recalled meeting the singer as a teenager. "I once met Dolores O'Riordan when I was 15. She was kind and lovely, I got her autograph on my train ticket and it made my day. She had the most amazing voice and presence. So sorry to hear that she's passed away today x," he wrote on Twitter.

‘Child’s father’, 24, is arrested two days after young mother was killed with single shot to the back of her head while pushing three month-old baby in stroller through NY city’s Upper East Side

‘Ex-boyfriend’ is arrested two days after young New York mother was shot dead at point-blank range while pushing her infant in a stroller through [...]