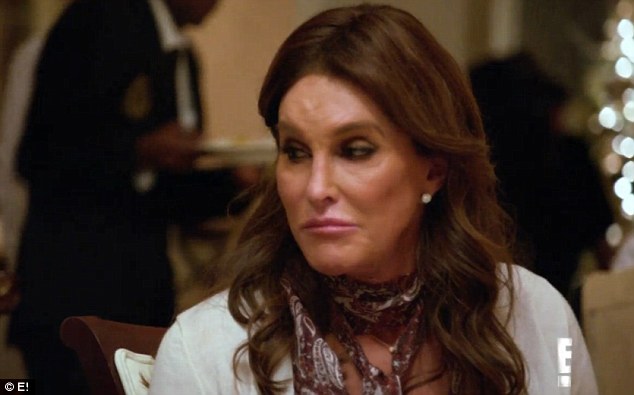 Bruce Jenner killed Kim Howe, 69, along the Pacific Coast Highway in Malibu in a traffic accident in February 2015. Two months later the Keeping Up With The Kardashians star came out publicly as transgender woman Caitlyn.
Now a new book, Kardashian Dynasty: The Controversial Rise of America’s Royal Family from Gallery Books, alleges that the former Olympian announced his change from male to female at that time period to avoid manslaughter charges for taking Howe’s life.
It was also claimed that for many years, Kris Jenner asked the athlete to ‘pray away’ his urges to live as a woman. PageSix ran a partial excerpt from the book on Sunday.

A big distraction? The new book Kardashian Dynasty: The Controversial Rise of America’s Royal Family alleges that Bruce Jenner transitioned to Caitlyn in April 2015 to run away from possible manslaughter charges caused by Bruce Jenner in February 2015; here the couple is pictured in February

She did not want him to transition? It was also claimed that for many years, Kris Jenner asked the athlete to ‘pray away’ his urges to live as a woman. PageSix ran a partial excerpt from the book on Sunday; here the couple is seen in 2010

A lot of claims: Kardashian Dynasty: The Controversial Rise of America’s Royal Family from Gallery Books is written by Ian Halperin

It was alleged in the book, which is from author Ian Halperin, that Bruce was ‘driving at an unsafe speed’ in Malibu at the time of the wreck. That means he could have faced some heavy charges.
‘Before Bruce got into the accident, he gave the world hints about his true sexuality,’ Halperin quotes a friend as saying.
‘After the accident, he went full steam ahead. I truly believe he was trying to misdirect the negative publicity he received after the car crash….it was clear he was worried about being charged.’ The author quotes a friend of Jenner’s who insisted that the star ‘misdirecting the serious offense by promoting his transition.’

An awful accident: Bruce can be seen here in a blue T-shirt on the scene of the crash which took the life of Kim Howe, 69

And when the June issue of Vanity Fair – which was put together in March – came out, Jenner had captured the attention of the world. The L.A. District Attorney announced in September they would not file charges. In December Jenner settled a lawsuit filed against her by one of the drivers involved in the fatal crash.
Hollywood agent Jessica Steindorff claimed she suffered serious medical injuries and lost wages after being hit by Jenner while driving her Prius. Steindorff, who counts Victoria’s Secret model Alessandra Ambrosio among her clients, was driving on a suspended license at the time of the accident.

His/her big story: ‘After the accident, he went full steam ahead. I truly believe he was trying to misdirect the negative publicity he received after the car crash….it was clear he was worried about being charged,’ it was claimed; here Caitlyn is seen on the June 2015 cover of Vanity Fair.

In January, Jenner settled with Howe’s two adult stepchildren, William Howe and Dana Redmond. The sum was not disclosed. As far as Kris asking Bruce to suppress his urges to became a woman, an NCAA coach who had worked with Jenner said Kris – now 60 – did indeed want Bruce to stay a man. ‘She told him he should pray,’ the source said, ‘that church could help heal him.’ It was added that Kris was trying to do ‘conversion therapy’ with Bruce. They attended bible studies led by conservative singer Pat Boone. He was ‘a fierce critic of any number of liberal causes, from the pro-choice to the gay rights movements,’ Ian added. Kris also went to the Calvary Community Church in Westlake, California, a church ‘long associated with homophobic positions.’ A member of their executive team was fired in 2012 for coming out as gay, it was noted.

She tried her best to keep Bruce as Bruce: It was added that Kris was trying to do ‘conversion therapy’ with Bruce for years

But he still had his urges: Bruce could not hide the fact that he wanted to be a woman, even though he attended services with conservative Pat Boone

She leaned on the church for support: Kris often took her family to church in LA; here Kris and Corey Gamble are seen with Kim, North West, Kanye, Kendall Jenner, Kylie Jenner and Khloe at a church in Woodland Hills on Easter Sunday in 2015

Brad Johnson, the church pastor, had gotten close to Bruce and Kris as they liked him ‘hip, irreverent style.’ Johnson had been trained by Rick Warren, author of the mega-best-seller The Purpose Driven Life.
Warren was also a top proponent of California’s anti-gay-marriage law Proposition 8.
But Johnson faced scandal in 2007 when he was accused of cheating on his wife. He tried three times to kill himself and ended up an employee at Starbucks. Kris has said God told her to find Johnson and help him. When she did find him, she helped him start Life Change Community Church.

Old scandal: The book also alleges Kris was instrumental in the 2007 release of Kim’s sex tape with Ray J; here Kim is seen in Las Vegas on Friday

It was ‘dedicated to giving people second chances,’ Ian noted.
A church was also started in Agoura Hills, California, and the Kardashian became a part of it. ‘Although Kris was undeniably sincere about her religious beliefs, the church became a convenient prop whenever she or the family needed to burnish their image. After her divorce from Kris Humphries and the subsequent backlash, Kim started tweeting regularly about her church attendance,’ wrote Halperin.
And the author added Kim’s romance with Kanye West was created by Kris.
Kim also donated money to the church with her ebay sales: ‘The clothes I got will be up on eBay next month for a charity auction! Going to Life Change Community Church!; she wrote on her site.

Kris set this up: And the author added Kim’s romance with Kanye West was created by Kris; here they are seen in October

The book also alleges Kris was instrumental in the 2007 release of Kim’s sex tape with Ray J. At the time Ray J said: ‘I shot the tape and she kept the tape, so she said the tape got lost I guess when she was moving.’
Kim threatened to sue, Vivid Entertainment – the company that released the tape – said they were operating in the law, and they settled.
‘The so-called lawsuit and press release about Kim’s dismay appeared to be nothing more than an attempt to portray herself as a victim of an unscrupulous thief or Ray J himself,’ Halperin wrote.
‘Whether she planned it from the beginning is still an open question.’
Ian also notes big holes in the KUWTK show, such as Khloe’s meltdown over her DUI. The writer points out that she got her DUI even before the show was greenlit. But the show ran a disclaimer: ‘This episode features recreations of actual events.’

On On her own: Caitlyn is thriving as a woman; here she is seen in at the 27th Annual GLAAD Media Awards at the Beverly Hilton Hotel on April 2