Katie Malone, former assistant to Congressman Elijah Cummings  [D-MD] was home with her 9 children when it was  razed by fire, in Baltimore MD Thursday

The body of one child was recovered, while five others are presumed dead

Malone’s husband was at work, when fire broke out, Fire and rescue arrived around 12:30am, Thursday but all three floors already engulfed by flames

Fire tore through a couple’s home in South East Baltimore, Maryland in the early hours of Thursday  leaving three survivors with six  of their nine childrenpresumed dead
The woman identified the woman as Katie Malone, and two of her children were taken to hospital in a critical condition and the office of Rep. Elijah E. Cumming. Katie Malone was a special assistant who has worked for Cummings for 11-years.
‘It’s a very difficult time in our office,’ said Cumming to reporters at a news conference on Thursday morning and revealed he had spoken to Malone’s husband at length.
Firefighters found heavy flames coming from all three floors of the home when they answered they arrived on the scene around 12:30 am Thursday, and they attacked the blaze from outside, fire department spokesman Chief Roman Clark said.
‘The building was fully engulfed when they arrived on the scene,’ he said by telephone.
William Malone was at work when the fire razed his home. Katie who was home alone with the nine children reportedly in critical condition along with two of the children. The condition of the third child is classified as serious. He said he does not know what may have caused the fire. The missing children include a 9-month-old boy, a 2-year-old boy, 3-year-old twin girls, as well as,  2 girls ages 10 and 11.

Katie Malone who has worked as a special assistant for House Rep. Elijah Cummings for nearly 11 years

Katie Malone and two of the children are in critical condition, while the third child is in serious condition. Her husband was at work during the fire outbreak in the early hours of Thursday morning

One child has died and five other children are presumed dead after a fiery house collapse that injured four others who escaped from the home in Northeast Baltimore’s Cedmont neighborhood Thursday morning, the city Fire Department said.
Heavy construction equipment arrived after sunrise to clear debris and aid crews in searching for the children, but Baltimore Fire Department spokesman Chief Roman Clark said the missing are presumed dead.
“This is a recovery effort at this point,” Clark said.
One of the children’s bodies was recovered about 10:30 a.m., Clark said. While the excavator cleared debris, firefighters searched by hand for the others.
Four occupants of the residence, a woman and three other children escaped. All have been taken to hospital, the woman and two of the children are in critical condition, the third surviving child is listed as being in serious condition,Clark said.

The charred remains of the home destroyed by fire killing six children, in Southeast Baltimore on Thursday

One child dead, 5 others presumed dead after a fire in Northeast Baltimore Thursday morning.

Rep. Elijah E. Cummings’ office identified the woman as Katie Malone, a special assistant who has worked in the congressman’s Catonsville office for nearly 11 years handling issues such as immigration, postal services, and the military, including Service Academy nominations.
“It’s a very difficult time for our office,” Cummings told reporters at a news conference Thursday morning.
He said he spoke to Malone’s husband at length, and he told Cummings that Malone “is going to be OK.” Three of the nine children survived, the husband told Cummings. 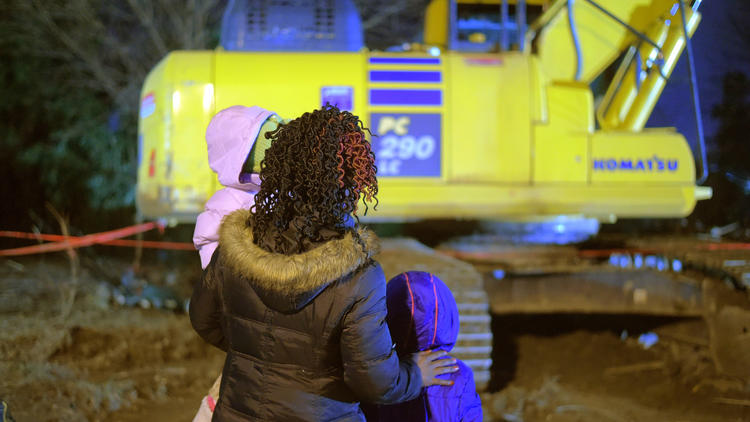 Search and rescue efforts this morning focused on ‘recovery operations’ as firefighters dig through the debris. One child was recovered around 10.30 am, the 5 others presumed dead

In a statement, he said “My staff is a family and this unimaginable tragedy is shocking and heartbreaking to us all. I again ask for your prayers.”
One of the three children taken to the hospital after the blaze has since been released, according to William Malone who was not home at the time of the fire because he was at work for a restaurant.
‘I’m still in shock to be honest,’ said Malone, who was reached by phone at a relative’s home.

Cummings said Katie Malone has worked as a special assistant in his Catonsville office for nearly 11 years.
Visiting the scene of the family’s tragedy, Baltimore mayor Catherine Pugh,  asked for people to pray for the victims of the blaze.
‘I can’t imagine the pain of a mother or father who has to suffer this kind of loss,’ Pugh said.
Expressing his condolences on his Facebook page, Maryland governor Larry Hogan said:’The First Lady and I are devastated by the news of the tragic fire in Baltimore City this morning,’ Hogan wrote.
The cause of the fire remains unknown. According to NBC 4 investigators are trying to determine whether the fire was caused by a faulty space heater,

Cops say California teen girl, 15, killed by officers during shootout ‘witnessed’ dad kill her mother – but still fired back and charged at officers while wearing tactical gear who caught up with her and fugitive dad

Anthony John Graziano, 45, was accused of killing his estranged wife and abducting their 15-year-old daughter Savannah Graziano, 15, who was killed alongside her father in a [...]