Fire broke out at Notre Dame Cathedral in Paris, as roof and spire collapse from the flames on Monday night

‘We WILL rebuild Notre Dame’: French president Macron says ‘the worst’ has been prevented as bell towers are saved but inferno reduces much of the medieval cathedral to ashes in just an hour

Firefighters scrambled to remove troves of art treasures from the 850-year-old historic religious edifice, which allegedly took 300 years to build

The fire was first reported at 5.50pm (GMT) on Monday and the building was evacuated soon afterwards

French President Emmanuel Macron has vowed to rebuild Notre Dame with help from the international community after a devastating fire gutted the famous cathedral on Monday night.
Speaking just hours after the roof of the 850-year-old building caved in, Macron told the world’s assembled press that  a national fundraising campaign to restore Notre Dame would be launched Tuesday, and he called on the world’s ‘greatest talents’ to help.
The French leader credited the ‘courage’ and ‘great professionalism’ of firefighters with sparing Notre Dame’s facade and two landmark towers from being destroyed.
In an impassioned speech outside the cathedral, Mr Macron said: ‘We will appeal to the greatest talents and we will rebuild Notre-Dame because that’s what the French are waiting for, because that’s what our history deserves, because it’s our deepest destiny.’
Late on Monday evening fire chiefs confirmed that the structure of the cathedral has been saved, despite initial fears it may be entirely destroyed.

This is the moment the flaming spire of the Notre Dame cathedral fell down as a blaze roared through the historic building Monday.

Notre Dame Cathedral suffered what officials described as ‘collossal damage’ in Monday’s fire out break. The  850-year-old cathedral was saved from total destruction but the blaze wrecked the iconic spire, roof and glass windows.
Spire of the historic church in Paris.l has collapsed as fire ravaged the historic building with flames erupting through the roof on Monday evening.
The Shocking footage posted on Twitter shows the 300-foot-high spire topple over amid the conflagration at the 850-year-old monument.
Firefighters were still fighting to keep the fire under control Monday evening local time.

The cause of the fire was not clear, but it was possibly linked to a multimillion-dollar renovation project taking place at the historic structure.
According to French newspaper Le Monde, the fire broke out in the attic of the monument before spreading across the roof.
Officials in Paris said the fire could be linked to restoration works as the peak of the church is currently undergoing a $6.8 million [6 million-euro] renovation project.
Late Monday night, a fire service spokesman said the two towers and the main structure of the cathedral have been saved from complete destruction as blaze begins to weaken.
He added that three or four hours are needed to contain the rampaging flames while France’s Deputy Interior Minister Laurent Nunez said “the fire had decreased in intensity”
Emmanuel Gregoire, the deputy mayor of Paris, said the cathedral had suffered “colossal damages” and that emergency workers were trying to salvage the art and other priceless pieces stored inside.
Scaffolding that had been set up around the building has been decimated along with large parts of the Cathedral itself, including the spire, which dates back to the mid-19th Century.
A “stray flame” linked to the  $6.8million renovation work is thought to have sparked the inferno in the loft at around 5.30pm local time.
“It appears that it all began as a relatively small fire linked to a stray flame in the roof,” said an emergency services source.
“The fire was so high up that it was difficult to get to, meaning it soon spread across the roof, causing a terrible blaze.”
Police said no deaths have been reported although a firefighter has been “seriously injured” while battling the blaze, according to local reports.

As the blaze raged, Paris authorities admitted that getting firefighters to the top of the building “was almost impossible.”
“It’s much too high up, and the only access is stone and spiral staircases – getting fire fighting crews up there is impossible,” said an emergency services source.
“This means that the fire has been able to spread across the roof, and it now threatening the two main Gothic towers.”
The source added: “We are not aware of any casualties, or of anyone being trapped, so there will be no emergency rescue plans being put into action.”
An emergency services source said that a water drop via plane or helicopter “was impossible” because the weight of the water dropped at low altitude would weaken the building and cause “extreme damage.”
“Everything is collapsing,” a police officer near the burning edifice said as the entire roof of the cathedral continued to burn on Monday night.

Despite the seeming totatal devastation, officials in Paris said the blaze stopped short of totally gutting the 850-year-old medieval church 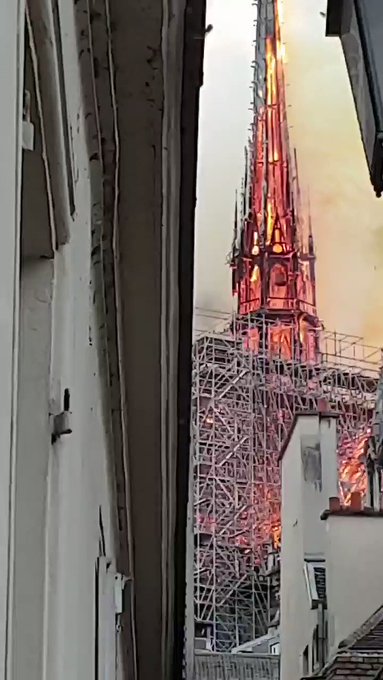 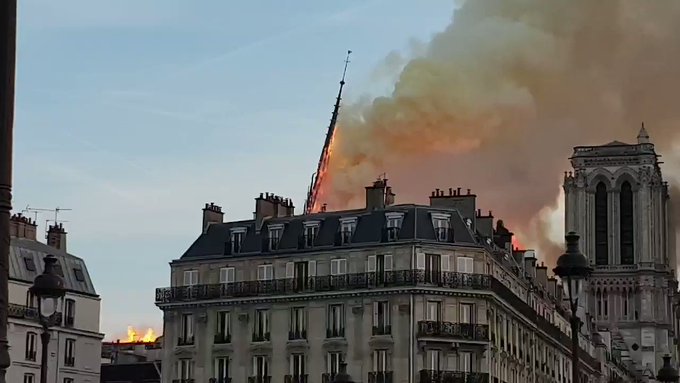 Local Parisiens sent out tweets about the fire on Monday, mourning the destruction the world reknowned landmark

The cathedral’s landmark spire, built in the 19th century, was been destroyed by the inferno

The fire spread quickly and the entire wooden interior of the church was burning, an official said

Firefighters cleared the area around the cathedral, which marks the very centre of Paris, while nearby buildings around were evacuated.
“An evacuation is in progress,” said a police officer at the scene. “People are being advised to clear the area.”
Panicked locals have expressed their concern for the medieval cathedral on Twitter.
One witness wrote: “It’s getting worse. But the fire brigade has turned up. Hard to see how the tackle this. The plume of smoke is already 100s of feet long.”
Another resident said: “We had an event nearby tonight but no one could concentrate. I had to come here to see,” she said. “Everyone s do calm and respectful.”

The entire frame of the historic cathedral’s roof [before photo], reportedly was damaged in the blaze

Locals broke out in a-singing prayer in multiple places nearby.
One pulled up the words of a song dedicated to the Notre Dame,  as tears rolled down his face.
“My heart bleeds,” said Bertrand, a finance executive pulling up the words on his phone.
“I was at home when I heard the news. Me I’m here praying with strangers.”
There was a cheer as more fire engines arrived. Blue lights flashed from the side streets and river boats.
The fire brigade can be seen in videos dousing the savage blaze with water.
French leader Emmanuel Macron, who postponed a televised speech to the nation because of the massive fire, has attended the scene.

Eight-months pregnant Mexican woman is found dead, her baby cut out of her womb by couple who was unable to conceive – Infant girl was recovered alive and the womb raiders charged with ‘kidnapping and femicide’

Heavily pregnant 20-year-old was found dead with baby cut out of her womb in Medellin del Bravo, Vera Cruz, Mexico Authorities have recovered her infant daughter, alive and [...]